Ajantha Mendis: Hopefully not the second coming of Jack Iverson

Sri Lanka's Ajantha Mendis, who was recently named by the ICC as the Emerging Player of the Year, has put the cricket world in a spin lately. Amid the first decade of the 21st century, when batting averages and totals have steadily increased as pacemen such as Donald, Ambrose, Waqar, Wasim, McGrath, Pollock and Walsh have all departed, it has been a welcome change. With quality spinners also becoming a endangered species due to the proliferation of roped boundaries, better bats, more powerplays and Twenty20, Mendis was a timely arrival, particularly as the most decorated spinners of our time, Shane Warne, Muttiah Muralitharan and Anil Kumble are about to head into the sunset.

Since making his international debut earlier this year, Mendis has taken 33 ODI wickets in 13 matches at an average of an average of 10.81. In addition to all this, his best performance a demolition of India in the final of the Asia Cup, taking 6/13 against a batting arsenal famed for its ability to demolish spinners. He then proceeded to make his Test debut in Sri Lanka's home series against India and proceeded to flummox the Indian batsmen, particularly the famed middle order. He took 26 wickets at 18, and was promptly named man of the series. 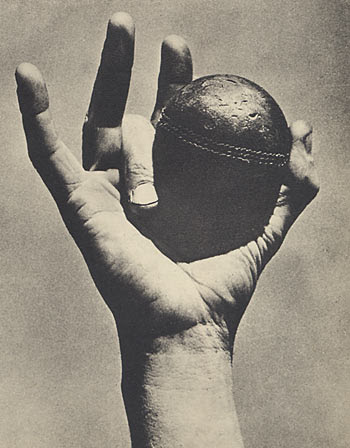 With his wide repertoire, most notably his carrom ball, Mendis has bamboozled many batsmen and is a major leading force behind Sri Lanka's recent triumphs. His signature delivery was pioneered by Jack Iverson (bowling grip pictured), an Australian spinner who quickly shot to fame in the Ashes of 1950-51 against England, terrorising the batsmen for a season before disappearing from first-class cricket in the following year and eventually committing suicide after suffering depression.

Richie Benaud, the doyen of commentators, once said
"There have been plenty of spin bowlers around for more than a hundred years but the four, for me, who have broken the mould and made batsmen think seriously about what was coming down the pitch at them, have been Bernard Bosanquet, Jack Iverson, John Gleeson and Shane Warne."

Mendis can now be added to the list, and hopefully for the sake of cricket, he stays around a lot longer than Iverson.

Like Mendis, Iverson experienced more a more arduous upbringing than most. His father was
austere and strict towards the younger Iverson and expected his son to be self-reliant. He was sent away to board and when he finished school, he did not work in his father's real estate firm, as many businesspeople would do with their children. Instead, Iverson headed alone into the unforgiving Australian desert, tending to livestock. Eventually, with the outbreak of World War II, Iverson enlisted in the armed forces and was deployed to what is now Papua New Guinea. There he began experimenting with bowling during recreation matches with other soldiers; his prior experience was playing in a few school matches more than a decade earlier under the leadership of Lindsay Hassett, who later captained him for Australia.

Mendis had the family responsibility thrust on him at the age of 18 in different circumstances, when his father died of a heart attack. He was spotted during a match against a Sri Lankan Army team, and in order to support his family, he enlisted and played cricket for the military. As with Iverson, Mendis also saw active duty.

Upon their emergence into first-class cricket, both players made quick progress with seemingly few impediments, routinely despatching an assemblyline of outclassed batsmen who were unable to comprehend what was heading towards them. Iverson made his first-class debut for Victoria in 1949-50. With the national side touring South Africa, it was the opportunity for a new crop of players back in Australia to push for selection. Iverson was the top wicket-taker in the Sheffield Shield season, with 46 scalps at 16.6 in just seven matches. He was duly selected for an Australian Second XI tour of New Zealand where he proceeded to claim his victims at an astounding average of 7!

The following season, Iverson made his Test debut in the Ashes series of 1950-51. His first Test wicket was that of Trevor Bailey, a middle-order batsman known for his dour and sturdy defensive style. Bailey once batted for more than seven hours in a Test for just 68 runs, earning himself the sobriquet of "barnacle". Likewise, Mendis made his international debut in his second year of first-class cricket. His maiden Test wicket was Rahul Dravid, penetrating the famed defence of a player known as "The Wall" with a carrom ball that broke through bat and pad. By the end of their debut series, both players topped the wicket-taking lists and played a pivotal role in their teams' series wins, with Iverson taking 21 wickets at 15.

As the saying goes, you learns more about a champion when he is staring defeat in the face than when he raising his fist in triumph.

In their first two seasons, neither players were strenuously tested by opposition batsmen, having taken all before them. A successful spinner needs a big heart to survive the onslaughts of aggressive batsmen; unlike a fast bowler, he cannot intimidate his opponents with bouncers, but must outmanoevre them.

However, Iverson was put under the microscope during the season by some of his Australian teammates. When Iverson bowled either in the nets or on the field for Australia, Hassett, the captain of both Victoria and Australia, would forbid New South Wales players from viewing his action, hoping to keep them in the dark so as to maintain an advantage in clashes between the Sheffield Shield heavyweights. Hassett achieved this by banning them from batting against Iverson in the nets, and when Iverson bowled in Tests, he put the New South Wales members of the Test team behind the bowling arm. He would move Keith Miller, the New South Wales allrounder, from a position in slips, to mid-on or mid-off. This irritated the New South Welshmen, but Hassett was unmoved.

As it was, the two state heavyweights-who at the time had a virtual duopoly on Australian cricket-met in the middle of the Test season, with both at full strength with their Test players. The New South Wales batsmen, led by Keith Miller and Arthur Morris, began to unravel Iverson's secrets and launched a strong attack which demoralised him and went a long way towards winning the match and breaking Iverson's aura. The pair launched a withering burst, propelling New South Wales to 459 from 93 overs, a rapid rate of scoring for a first-class match even by modern standards, especially as Victoria's three other frontline bowlers-Ian Johnson, Bill Johnston and Doug Ring-were all Test players and members of Bradman's Invincibles. Iverson was the most effective and economical on the day, with 3/108 from 28 overs, but for the standards he was used to, it was quite rough treatment.

During the subsequent ODI series in Sri Lanka, India bounced back after their Test series defeat and their humiliation in the Asia Cup to claim the series 3-2. During the five ODIs, India managed to score more reasonably against Mendis in a couple of matches. India's most assured batsmen against Mendis were Virender Sehwag and MS Dhoni. Morris was an attacking opener and part-time spinner like Sehwag, while Miller was a mighty hitter with a distinctive mane and was the object of much female adulation, like Dhoni. All four were the senior batsmen in their respective teams.

The fragile Iverson began to doubt his ability. In the last two Tests against England, he took only five wickets. In each of the next two seasons, Iverson made himself largely unavailable, feeling himself unready for first-class competition. He played in only one and two first-class matches respectively in each of the two seasons. After that, he toured India with a Commonwealth XI in 1953-54 before retiring.

Despite his loss of confidence, Iverson was still largely unconquered by batsmen, ending with a career bowling average lower than 20; his average in the last three demoralised seasons was 24.61, hardly poor at all. He still had a lot to offer to the cricket world, as evidenced by the 17 wickets at 18 that he took in three unofficial Tests during the tour of India, but sadly, he felt otherwise and disappeared from the scene. Affected by depression, Iverson took his life at the age of 58.

In the modern era, Mendis faces a different set of circumstances. With the proliferation of video technology and super slow motion cameras filming the action from all angles, batsmen will have more assistance in decoding Mendis' techniques. As a result, Mendis will need to hone the subtleties in his repertoire and rely more on his mental powers to overcome the batsmen. Unlike Warne and Muralitharan, Iverson and Mendis did not face grave challenges from batsmen before establishing themselves at international level. As a result, they did not need to grow such a thick skin before they had found their way to international success. As everyone knows, cricket is played mostly between the ears. Unhappily, Iverson was mentally unable to withstand the effects from the few aggressive batsmen who had unlocked his secrets. For Mendis, how he deals with batsmen who have decoded his secrets is yet to be seen.

Luckily for Mendis, in the modern era, unlike in Iverson's time, there is no shortage of psychologists and other support staff for elite cricketers. Hopefully the parallels between Mendis and Iverson don't carry through to their cricketing demises. In this batting-dominated era of cricket, it would be a great shame if Mendis was but an Iversonesque shooting star.

Posted by YellowMonkey at 11:23 PM

To Benaud's list, I'd add Saqlain Mushtaq... in my book, rivals Akram in bowling intelligence... also.. not many batsmen have charged down the track and survived against him.. sort of explains the heap of wickets he'd bag in the final overs of ODIs.. most of it batsmen giving him the charge and miscuing/missing to be stumped...

Seems like Richie Benaud missed or drpped MURALI,the great spinner of all the time...

Ajanthe mendis is vry nice baller. I like his invention of carom ball which is very effective.