Rewind 1999: The birth of Jayawardene 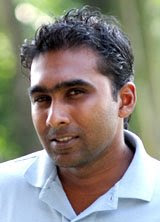 Ten years ago, on this day, one of the most ill-tempered cricket matches in recent years took place at the Adelaide Oval. Rather prophetically, an article by Mike Coward of The Australian was published on the day of the match, entitled “Muralitharan deserves an apology, not idiot’s jeers”. The umpires were Ross Emerson and Tony McQuillan, who had presided over the last match in which the off spinner had been called.

In an ODI between England and Sri Lanka during the annual Australian tri-series, Muralitharan was no-balled for throwing by Western Australian umpire Ross Emerson. It sparked a heated argument between the umpires and Sri Lankan captain Arjuna Ranatunga, followed by a walk-off as Ranatunga consulted cricket administrators before deciding to proceed with the match. In the meantime, Emerson's actions and the ensuing distress of the Sri Lankans were visibly applauded by some in the English viewing area. After appearing that he would forfeit the match, the Sri Lankan skipper took his players back onto the field, and after Muralitharan finished his over, Ranatunga switched him to bowl at Emerson’s end, resulting in another angry debate argument about where Emerson would stand. Ranatunga wanted Emerson to stand up close so that it would be more difficult for him to see Murali's arm. Emerson was picked up by the microphones saying "I'm the umpire, I'm in control", something that would prove to be ironic.

But the chaos didn’t end there and began spreading among the players. During Sri Lanka’s run chase, Roshan Mahanama appeared to obstruct Darren Gough as he went to field the ball; Gough then feigned a headbutt at the batsman. Soon after, England captain Alec Stewart barged into Upul Chandana. Stewart, who was wicket-keeping, was overheard by stump microphones telling Ranatunga the immortal words "your behaviour today has been appalling for a country captain”.

Privately, the match referee Peter van der Merwe, a former South African captain, said that if he had applied the ICC Code of Conduct to its full extent, the series would have been reduced to “eight-a-side” cricket. As it was, only Ranatunga was sanctioned, receiving a six-match suspended ban. At the time, ACB chief executive Malcolm Speed phoned Australian Prime Minister John Howard to enlist his help in preventing the possibility of the tour being abandoned..

What made Emerson’s call so controversial was that the ICC had, as a group, cleared Muralitharan to bowl, and that in effect, Emerson was unilaterally overruling the decision. While on-field umpires retained the right to no-ball bowlers, in the case of bowlers already being cleared, it was generally meant to deter the occasional deliberate and blatant throw, rather than the standard delivery generated by a controversial action.

Following the match, Emerson was stood down and never officiated in an international match again. Soon after, it was revealed that Emerson was on stress leave from his day job and ACB Chairman Denis Rogers mused of a linkage between the sick leave and Emerson’s performance, prompting the umpire to sue.

Amidst the chaos, two sublime centuries were almost forgotten. The first was by Graeme Hick, then in the midst of a golden run of three centuries in four ODIs, the other innings being an unbeaten fifty. One imperious flick over the mid-wicket region went for six and rolled all the way outside the ground, across the asphalt entrance and across King William Road. The other was the work of a 21-year old emerging batsman by the name Mahela Jayawardene, who brought up his maiden ODI ton. Given Emerson’s bitter comments about Sri Lanka having an unfair advantage through Muralitharan, it was ironic that their eventual win was made possible by a rudimentary and entirely preventable error on his part.

Having been set 303 for victory, a highly imposing target for that era, Sri Lanka had stumbled to 3/68 when Jayawardene came to the crease. The chase looked to be faltering, and Jayawardene was in a heavy slump, with 47 runs at 6.85 in his last eight ODI innings at a strike rate of less than 35. In ten career innings, he had accumulated only 122 runs at 15.25 and would have been under extreme pressure for his position in the team. Of anyone who could have steered the imposing run-chase, Jayawardene would have been the least likely, given the spiteful environment and extraordinary distractions of the day. If he was rattled by the situation, he betrayed no indication of the sort, adding 33 of the next 43 runs at a fast rate.

Emerson had a reputation as a showman, but he had yet to finish for the night. With the score at 3/111, Jayawardene was caught short of his ground with a direct hit, but Emerson, who had a penchant for trusting himself on close run outs, turn down the appeal with his naked eye. The correct decision would almost certainly have ended the match with the loss of Jayawardene, who had been scoring at faster than a run-a-ball, but the young batsman brought up 50 from just 43 balls, conjuring up Sri Lankan hopes of a spectacularly improbable victory with scintillating play behind the wicket. Jayawardene departed for 120 as his team stumbled near the end of the run-chase, and in the end, Muralitharan hit the winning run as Sri Lanka scraped home by one wicket with two balls to spare. Without Emerson’s intervention, such a convergence of events, and the dramatic win, could never have been possible. Perhaps the only thing missing from the umpiring spectacle was that Sri Lanka won with two balls remaining instead of one. Emerson had called a seven ball over during Sri Lanka’s innings, so they should have only had one ball remaining. A literal gifting of the win would have been more ironic given Emerson’s attitude.

People may today decry the cringeworthy gestures of Billy Bowden, but never was there such a deplorable display of umpiring at international level. Perhaps in recent times there has never been a more significant case of an umpire affecting a match and with it cricket history through such poor judgment. Kasprowicz’s dismissal and Edgbaston in 2005 and last year’s Sydney Test turned matches and tempers but neither were fundamentally avoidable nor borderline disruptive as Emerson’s actions.

On a longer term note, the incompetent umpiring not only won the match for Sri Lanka, but helped Jayawardene establish himself as a player of international class after producing an innings of class under extreme pressure. Had he been correctly given out, who knows if his blooming may have been stunted for year, or even longer. Luckily for cricket followers, Jayawardene has developed into one of the leading batsmen, captains and slips catchers of the last decade. Still aged only 31, he has accumulated almost 8000 runs in both forms of cricket, and taken 141 catches. One of the most attractive and graceful strokeplayers of this period, he should pass 10,000 Test runs and perhaps break the Test career run-scoring record. He should also break the Test catching record, and perhaps become the first non-wicket-keeper to reach 200 catches.

Commentators have long regarded the disputed bump ball catch of Bradman by Jack Ikin as one of the most influential umpiring decisions of all time, reasoning that had Bradman been out, he would have retired there and then in 1946-47 and that the Invincibles would never have been. But Bradman had scored a century in the lead-up to the Test and would have retired on his own terms had he chosen to do so, rather than being dropped, and his legacy as the undisputed giant among cricketers would not have changed. Jayawardene would not have had such a luxury and might well have been dropped. In gifting Jayawardene a life, Emerson could have inadvertently and launched the career of one of the leading players of our time and one of Sri Lanka’s greatest. Quite ironic that for one of the worst umpires in recent memory, one of Emerson's worst blunders unquestionably became his greatest contribution to the sport.
Posted by YellowMonkey at 7:50 PM

a truly brilliant post...effortlessly captured the nuances of that match without being biased about facts...

though i rate jayawardene highly but still feel he has not lived upto his true potential yet...maybe in earlier part of his career when he used to play sweet short innings and then throwing his wicket against run of play hurting his stats....

A wonderful cognizant recollection of an intense match.

I've played grade matches in Sydney where Emerson officiated and you would be hard pressed to find a man as humorless, capricious or arrogant.

Very well written. I remember watching this match and being gobsmacked at the whole spectacle.

I seem to remember - slightly differently to you - that Stewart used the word "disgrace", but that may be just my age starting to show. I'm pretty certain though that Stewart made his comments to Ranatunga when he was keeping and standing up to the stumps. Normally such a statement would have been missed by the stump mics, but Stewart waited till he was in a full crouch and practically spoke straight into the microphone. Ensuring his words were completely audible.

Walk-offs? In addition to this one I remember watching the John Snow incident and the Gavaskar dummy-spit after being given out lbw against Dennis Lillee. That last one's on YouTube.

Not sure if the Pakistan v Darrell Hair incident is a walk-off or a "did not return".

Mahela Jayawardene is one of very few classical batsman left in cricket these days.